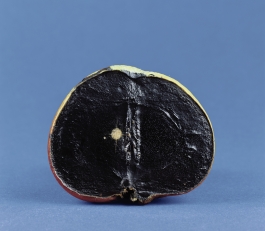 Luminous Bud
The Beauty of Kent (Newton’s Apple), silver gelatin emulsion.
Photographic negative with the light from the star Mira A. 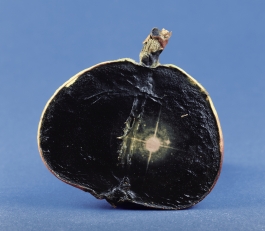 Luminous Bud (Stalk)
The Beauty of Kent (Newton’s Apple), silver gelatin emulsion.
Photographic negative with the light from the star Mira A. 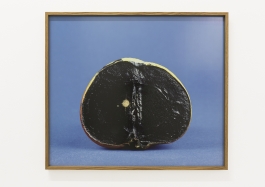 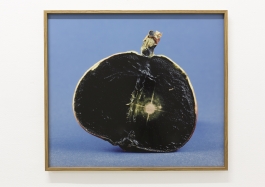 On an autumn day in the mid 1660s the young Isaac Newton found himself observing the orchard through the window of his study at Woolsthorpe Manor in Lincolnshire. As the afternoon descended into dusk and the moon appeared as a pale disc above the trees, he was startled by the sight of an apple dropping to the ground. ”Does the moon also fall?” he asked himself, as he returned to the worktable, and made a mental note for what would later become the Law of Universal Gravitation, the starting points for the Scientific Revolution.

The stars that came out that night were - unbeknownst to Newton - bodies of hot plasma. Mostly made up of hydrogen and helium, a star is held together by mutual gravity, a gravity that compresses it inward much like the apple strives for the center of the Earth. But as a star gets smaller its gravitational friction causes it to heat up in its core, starting a hydrogen fusion which radiates the excess energy outward in the form of photons. As these photons leave the surface of the stars they are free to traverse the vacuum of seemingly endless space. Unless they encounter something, like the eye of mammals and insects or any matter, they will continue traveling in a straight line for millions, billions or even trillions of years. Thus what is seen in the stars above is ancient light - light with an age attached to it, much like the annual growth rings of trees.

At the very same time as the apple fell to the ground in Lincolnshire photons of light started traveling towards our Solar system from the stars Mira A and Beta Centauri, until it 350 years later, was used to expose the photographs now on display. This starlight was collected and fixed on the now-rare apple that Newton first saw becoming a momentary celestial body. The meeting of these two physical motions, the drop of an apple that revolutionized our understanding of the world, and the perseverance of ancient light, creates a photographic event using light that predates the invention of the photographic medium itself.